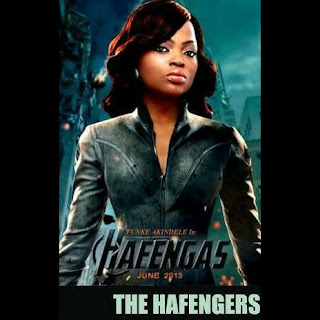 The film is a superhero film based on Marvel Comics superhero team:”The Avengers” and is directed by Anthony and Joe Russo.
Funke Akindele played the role of a  Dora Milaje member in the film. Funke plays as  a member of the Black Panther’s guards, the ‘Dora Milaje’ – who are a team of women who serve as the personal bodyguards of the Black Panther.
The movie tells the story of how the Iron Man, the Hulk and the rest of the Avengers corporate to fight against their most powerful enemy: Thanos.
Funke Akindele is  known for  her popular Jenifa’s Diary, Agbefo, Ojó ketàlá (2005) also  Avengers: Infinity War (2018) will be added to her CV.
The film will be released on 25th of April 2018.
(C)2019 TemmyPhilz Blog. All Rights Reserved.

An Interview with Alabi Temitope Moses, a Gospel Artist.

DAVIDO YET TO FILL UP O2ARENA FOR HIS SOON COMING SHOW

Did Kizz Daniel just show the whole world that he’s a cultist.